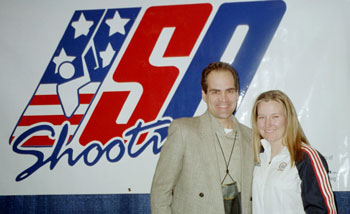 Who has had the greatest impact on your shooting career?
Rhode: Definitely my parents. Without them, I’d definitely not be here. But I also look at the medals as pieces of a pie and everybody has a piece of it: a lot of rides from my neighbors to the shooting range, help from companies and from people in the industry.

Why did the Olympic Committee discontinue women’s doubles trap?
Rhode: It’s very political and there’s a lot of speculation why. Doubles Trap was created for women in 1996 because it was the only shotgun event for women to compete in because they eliminated trap and skeet for women.

Do you suppose they eliminated women’s trap and skeet in 1996 because they did not want to publicize the scores of women who shot better than men?
Rhode: In my opinion, yes. A lady won (in trap). And the year after or a couple years after they eliminated skeet and trap and said that the only event women can compete in is double trap. Our scores were made so that women shoot 120 targets and men shoot 150. Therefore, our scores could never be compared which is kind of an interesting thing. In the following years, they opened it back to skeet and trap, but with women shooting fewer targets than men. Now in 2004, they have eliminated doubles trap saying there’s isn’t enough women competing in it even though we had more than 15 women and normally they only allow 15 women to compete, but they eliminated it and left it for men.

What event will you compete in at the next Olympics?
Rhode: Probably both international skeet and trap.
Tell us about the equipment you use?
Rhode: I shoot a Perazzi. I had been struggling with a gun that was too big. When I was 10 or 11 years old, someone at the range said “you’re exactly what this sport needs, there will be a brand new Perazzi waiting for you.” He sent me over to the Perazzi factory and there was a brand new one for me. I had won a second place medal, and he saw something in me and believed in me and I’ve been shooting Perazzi ever since.

You’re now a Perazzi sponsored shooter.
Rhode: Yes, I am, but what’s interesting is that the entire Olympic team shot Perazzi and the reason is that they are so reliable. I shoot an MX12 which is the same gun I shot in all three Olympics with a 29 inch barrel and screw in chokes.

What ammo do you use?
Rhode: Winchester. Winchester is one of those companies that made me what I am today. They delivered pallets of ammunition to my house and put their guys on it to develop a load for me when I was young and couldn’t take the recoil of shooting 1000 rounds a day. That’s what I shot for years. They developed even a better load that the whole team now shoots, the International AA load, 24 gram, 7/8 ounce.

Tell us about your training routine and what you do to maintain your skills.
Rhode: I am taking physical therapy for endurance and see a nutritionist 3 days a week. I shoot 800-1,000 rounds a day. I drill stations instead of shooting full rounds of skeet.

So you recommend staying at one station and shooting it until you’re comfortable you can hit the clay every time?
Rhode: When I was training for the Olympics I would shoot between 15-25 in a row for each target presentation. For instance, from station 1 in skeet, you shoot 25 high, 25 low, and 25 doubles. If you miss one, you start all over again at that station. You do that for all stations. That’s building muscle memory so shooting is as natural as walking down the street and you do not have to think about it. You start to see that picture and what it’s supposed to look like. Shooting rounds is a waste of time. By the time you get all around every station, sign up and get started again, you forget what you did.
Also, if you are shooting 100 of one target in a row without missing, it becomes a challenge to shoot them all and remain focused. You get to that 25th one and you say to yourself, “don’t miss, I don’t want to start all over again…all these people are watching me.” That’s like a mini-competition and the pressure is similar to a real match. Those are the things that you need to overcome mentally.
Those are my training techniques as well as video games. They are incredible for hand-eye coordination.

How do you handle the pressure of competition? How do you maintain focus and cut out the distraction while you are on the line?
Rhode: Drilling stations helps. You think, “If I can hit 25 of these at home, what’s one in a competition.” Also, if you drilled, shooting becomes like walking and you don’t think about it. When I’m standing on the line I’m singing a song in my head. I’m not thinking “oh my gosh, this is my last bird. Oh my gosh they are ahead of me. I can’t miss or I’ll be behind.” Instead, I’m singing some song and it helps me with the pressure.

What’s been the biggest challenge you faced in your shooting career and how did you overcome it?
Rhode: Prior to this last Olympics, the range I was shooting at could no longer give me the practice time I needed. The owner of one of the other local clubs built a range for me so I could get the training time I needed to go to the Olympics.

Tell us about your Second Amendment activities?
Rhode: Right now I’m in the process of trying to save one of my guns clubs. Actually the one I learned to shoot on. It’s been there for 58 years. I actually came out of a program there. They have a children’s program where kids can shoot for free once a month. They have all the guns and coaches there to help. Me and another medaled Olympian and 15-20 all- American shooters have come out of that club. Seventy thousand people shoot there every year.

When you won your first Olympic gold at only sixteen, Wayne LaPierre said that the media did not give you the coverage you deserved and that you were not chosen to be on a Wheaties box because you were a shooter. Do you agree with him?

What are you looking forward to doing in the shooting sports? What’s your trajectory now that you are only 25?
Rhode: I’d like to introduce more women and children to the sport. That’s my main mission, my main goal. I want to do as much as I can to save these ranges because that’s our future. My Olympic event is no longer, and I will have to start all over. There’s a new challenge laid down for me– trying international skeet.

What’s the best advice you can give to a young person who wants to become a shooting star?
Rhode: Never give up. Everyone asks me what it’s like to stand on the podium with a gold medal around your neck and why athletes keep going back. That one moment standing up there watching the American flag go to the top of the pole with the national anthem playing and 5,000 people going crazy… you realize that the Olympics are so much more. You overcame obstacles and you did not give up. Stick with it and overcome those bumps, because in the end it will be so much more sweeter when you do achieve your dream or goal.

Kim, you came to New York City recently, can you tell us a little about your trip?
Rhode: I went to NY for the Women’s Sports Foundation to raise money for women’s sports. Afterwards, the Mayor presented me with the Tiffany Apple which is the Key to the City, so that was pretty awesome.

Did you ask the mayor if he would give you a concealed carry license?
Rhode: (Laughing) I didn’t ask him that, but I understand it’s pretty difficult so I was happy to just get the apple.